I've heard it said that there are two kinds of math people: algebraic and geometric. If it is true, I suspect many math teachers are algebraic: the sort of people who are good at carrying out step-by-step symbol manipulations, and readily see meaning in formulas. On the other hand, I'm guessing that most students in our classes are more geometric: the sort of people who are better at thinking about images than symbols.

But even if such a distinction is bogus (like many "there are two kinds of people" claims,) there is no doubt that most math people prefer one mode or the other. I certainly know where I stand: I'm a geometric kind of guy. Much of my career as a math educator has centered on making algebra visual, and on creating enrichment activities in geometry. That is how I got started in curriculum development (geometric puzzles), and what I have returned to again and again (Lab Gear, function diagrams, Geometry Labs, Zome Geometry, Space, etc.)

I realize you are probably not very interested in my personality, so let's move on to this month's newsletter!

PS: scroll down to read about my summer Visual Algebra, visual Algebra 2, and visual Precalculus workshops.

Here are links to posts on my Math Education Blog that you might find interesting.
If you are so moved, you may comment on the posts, and/or subscribe to the blog.

The Common Core State Standards recommend a mathematical modeling approach to algebra. In other words, instead of starting with x's and y's, start with a (reasonably simplified) "real world" context, and extract some ideas about structures and symbols from that. I support this completely. In fact, it constitutes the "themes" part of Algebra: Themes, Tools, Concepts, the book I co-authored in the 1990's. (Now free on my Web site!)

However, that is insufficient. We can reach more students, and generate deeper understanding, if we complement the modeling approach with a visual approach. This is the "tools" part of Themes, Tools, Concepts. The tools in question include function diagrams, geoboards, electronic graphing, and the Lab Gear.

I blogged about Visual Algebra here, and it is the essence of my summer workshops this year.

I'm definitely a fan of "growth mindset", the latest edu-fad, as I have advocated some of these ideas for many years. I like Jo Boaler's Mathematical Mindsets book, which applies this concept to every aspect of math education. The book includes an eight-page bibliography, mostly about math education research, but it also mentions one of my Lab Gear books.

In any case, mindset is usually discussed as part of conversations about students, which of course makes a lot of sense. But what would it mean to have a growth mindset about ourselves as teachers? How do we avoid both complacency and perfectionism? I ponder that question here.

I have long advocated that programming is a kind of literacy. I blogged about this last October, (and mentioned those posts in my December newsletter.) To say the least, the reaction was not unanimous agreement. In particular, some of the objections were about the appropriateness of such an idea in the real world of 21st century education in the US. Read my response to those concerns in a recent post.

Just to be clear, programming for all should not be taught in the hyper-picky languages geared to professionals. The highly visual languages especially geared to education, such as Berkeley's Snap! make it possible for students to engage with deep and powerful ideas in a fairly short time. [Snap! is an extension of MIT's Scratch into a full programming language.] See for example how students in my Infinity class created beautiful fractals via programming, thereby learning about both computer science (recursion) and mathematics (fractional dimension) while being engaged and creative.

New and not-so-new on my Web site.

Using Desmos, I made an online tool to teach the idea of slope triangles for lines. It is based on an idea I first developed for other platforms, most recently the graphing calculator. (That version is still available here.) It is called Stairs, because it's all about making staircases on the Cartesian plane. Check it out, it's fun! I suggest some challenges there, but if you create a Stairs worksheet for your class, I'd love to see it.

π day is coming up soon. Perhaps you can build an activity around this applet which shows how the area formula for a circle follows from the circumference formula.

First have the students make circles on paper, using compasses, or tracing the bottom of cans and bottles. Then cut out the circles, and fold them repeatedly in half, so as to get four diameters with 45° angles between them. Cut out the resulting eight sectors, and rearrange them as shown in the applet. Then, show the applet to the class, pointing out it allows more accuracy by dividing the circle into more pieces, and follow the instructions given there. Finally, discuss what the final image tells us, before clicking "show dimensions".

Another option for π day, if your students know basic right triangle trigonometry, is Lab 11.8 in Geometry Labs: "π for Regular Polygons". (Actually, questions 1-3 do not require trig.)

While I advocate visual representations and approaches, I certainly don't believe that it is enough for students to look at a teacher demonstration in order to reach understanding. Typically, you want to precede such demonstrations with hands-on work, and follow them with some writing.

For example, if you want to show some of my animated Lab Gear slide shows to your class, do it after they've been working on the corresponding topic with the blocks. I created these slide shows mostly to introduce the Lab Gear to teachers. You can find eleven short shows here. The twelfth should follow soon. You can watch the shows online, or (if you're a Mac user) download the Keynote files.

If you're attending the NCTM meeting in San Francisco, come to my Lab Gear workshop, Thursday April 14 at 8am, in Moscone 3022. I will use some of these animations live and in person! 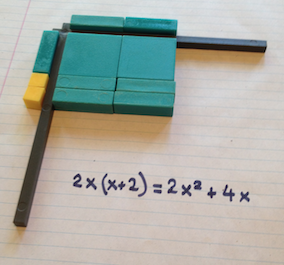 Here are some comments from participants in past workshops:

Taylor W, grades 7-12 math teacher, Seattle WA
Visual Algebra was a great primer that gave me confidence to effectively introduce manipulatives and other strategies into a high school algebra course. I saw dramatic differences in how many students were able to access the abstract parts of traditional algebra. Henri Picciotto's enthusiasm is contagious and will leave you energized to return to the classroom.
Elizabeth S, Ph.D., high school math teacher, San Francisco CA
Good PD gives you a few ideas that help you improve your teaching. Truly great PD changes how you teach. By that standard, Henri’s workshops are beyond great — they have transformed the way I set up student-centered learning experiences in my classroom. Henri models how teachers create learning communities. I cannot recommend his workshops highly enough.
Alina M, middle school math teacher, Seattle WA
Henri’s Visual Algebra course gave me so much interesting content for math class — there are multiple perspectives on concepts and lots of ideas for differentiating lessons. His workshops are good for aligning with the Common Core and best math practices. Definitely worth it!

There is more information about the content of the workshops on my Summer Workshops page.
If you have a question that is not answered there, just ask in a reply to this e-mail.

More info about me: Henri Picciotto